At the Max Planck Institute of Animal Behavior, Radolfzell / Constance

The Max Planck Institute of Animal Behavior at its sites in Konstanz and Radolfzell offers an international, interdisciplinary, and collaborative environment that opens up unique research opportunities. The goal of our basic research is to understand and predict animal decision-making in the natural world.

The Max Planck Department for the Ecology of Animal Societies, together with the Max Planck Research Group of Development and Evolution of Cognition and the Max Planck Fellow Group Comparative Socioecology, would like to fill this position as soon as possible, ideally by September 1st 2021.

The successful candidate will work primarily with behavioral and ranging data of Bornean orangutans collected over 15 years. By analyzing ranging data of simultaneous follows, we intend to identify the rules governing decisions by the various sex-age classes to initiate, terminate, or avoid associations with others. In addition, a comparative project will focus on social, ecological and cognitive drivers of movement and ranging by multiple frugivorous primate species using the same forest. Additional opportunities exist for involvement in ongoing projects on alternative male reproductive tactics and mother-offspring conflict under varying ecological conditions, based on existing orangutan data from a Bornean and a Sumatran population. No fieldwork is foreseen during this postdoc.

Applicants should hold a PhD degree in Biology or a related field, and be distinguished by a proven academic interest and experience with data collection on the behavior of wild animals, while simultaneously having expertise in the analysis of spatial data and modern statistical modeling (including both frequentist and Bayesian analyses). Enthusiasm for working as part of an interdisciplinary, international team is expected.

Candidates will work in a dynamic and highly international research environment. Our working language is English and consequently, applicants must be fluent in this language; knowledge of German is not required. The payment is made in accordance with your qualification and the collective agreement for the public service (TVöD-Bund).

Then we are looking forward to receiving your application until June 30, 2021, as a single PDF file, including a statement of interest, CV and list of publications, names of three references, contact information, and a sample publication. Please submit your application documents online.

Subject: Testing the effects of physiological stress on cognition and its links with fitness in the wild: empirical approaches

How animals gather, process and use information (i.e. cognitive abilities) is at the heart of  behavioural  flexibility,  which  has  been  proposed  as  a  particularly  powerful  way  for individuals to cope with spatio-temporal variation of the environment. Adjusting behavioural decisions  to  solve  unexpected  problems  imposed  by  environmental  changes  may  for instance require the ability to use novel behaviour patterns (i.e. innovation) and/or modify behaviours according to acquired information (i.e. learning). While these cognitive abilities are found in many taxa, we currently know very little about the variation of these abilities among  and  within  individuals,  and  more  specifically  the  mechanisms  underlying  this variation and its link with fitness components. This information  is nonetheless essential to understand how cognitive abilities in the wild shape the rapid adaptation of populations to past, but also current, human-induced, environmental changes.

Variation in cognitive abilities and their fitness consequences have been suggested to be  indirectly  linked  to  individual  condition  and  more  particularly  physiological  (including oxidative)  stress.  Accordingly,  an  increase  in  oxidative  stress,  as  observed  in  ageing individuals,  has  been  shown  to  lead  to  a  decrease  in  cognitive  functions  in  humans  and laboratory animals. Furthermore, oxidative stress has also been found to shape reproductive success  in  wild  populations.  Thus,  variation  in  oxidative  stress  may  simultaneously  affect cognitive abilities and fitness components, creating an indirect link between them. The aim of the PhD is to explore this hypothesis and unravel causal mechanisms linking variation in cognitive  abilities  and  variation  in  fitness  components  using  correlative  and  experimental approaches  in  a  study  population  of  great  tits  Parus  major on  Gotland,  Sweden.  In  this population,  cognitive  tests  have  now  been  successfully  implemented  during  breeding; cognitive and reproductive data have been collected, and the level of oxidative stress can be experimentally  manipulated.  The  PhD  project  includes  two  main  research  axes,  which  will provide the first in-depth investigation of physiological (stress) mechanisms underlying the links between cognitive abilities and fitness.
Objective  1:  Testing  the  link  between  adult  oxidative  stress  and  variation  in  cognitive abilities  and  its  link  with  reproductive  success,  especially  with  age. In  the  study population,  we  have  found  an  age-related  decline  in  cognitive  abilities. Based  on  blood samples collected in breeding adults whose cognitive abilities have been measured, the PhD student will first correlatively investigate whether this age-related decline is linked to an increase in several markers of oxidative stress (as well as hormonal stress). In a second step,  an  experimental  supplementation  of  dietary  antioxidants will  be used  in  adults of different  age  categories  to  test  the  causality  of  the  links  between  oxidative  stress  and variation in cognitive abilities and fitness components.
Objective 2:  Testing the long-term influence of developmental conditions, and in particular oxidative stress, on  adult cognitive abilities.Based on the long-term monitoring of the study  population,  the  PhD  student  will  first  correlatively  explore  whether  the  growing conditions  during  nestling  development  affect  cognitive  abilities  in  the  long-term,  in adulthood. In a second step, an experimental supplementation of dietary antioxidants will again  be used, this time on  nestlings, to manipulate the  level of  oxidative stress during development and test the long-term consequences on variation in cognitive abilities and fitness components after recruitment.

The PhD project will rely on national (S. Massemin and F. Criscuolo, IPHC, University of  Strasbourg)  and  international  (co-direction  with  P.  Bize  and  L.  Cauchard,  Aberdeen University,  UK)  collaborations.  The  feasibility  of  the  proposed  work  is  guaranteed  by  the presence  of  data  and  samples  already  collected  and  field  protocols  successfully  used  for several years in the study population, as well as funding secured for the field work and lab analyses via an ANR grant (Evol-cog, 2020-2024).
Required  skills: The  candidate  must  hold  a  Research  Master  (Master  2  Recherche)  in  the fields of evolutionary and/or behavioural ecology and/or ecophysiology, have excellent skills in  statistics  and  data  analyses  (preferentially  using  R),  and  have  strong  interest  for  (and  if possible previous experience with) both field work and lab work.

To apply, please send a detailed CV and a letter of motivation to blandine.doligez@univ-lyon1.fr and pierre.bize@abdn.ac.uk as soon as possible (we need to choose a candidate before june 14) 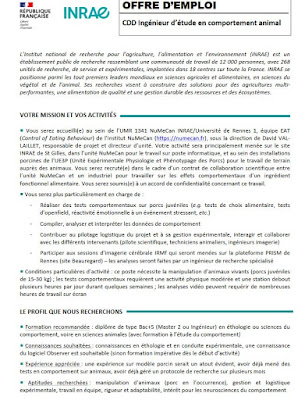 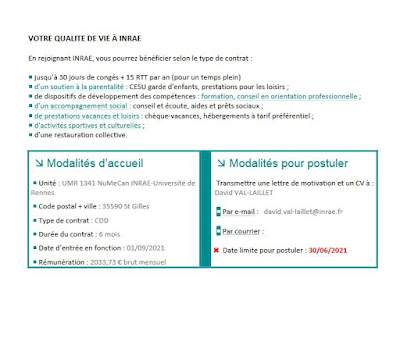 A postdoctoral position is available in the laboratory of Carol Shively in the Department of Pathology, Section on Comparative Medicine at Wake Forest School of Medicine to study social and biological factors that affect age-related changes in behavior and neurobiology in nonhuman primates (NHPs). The Fellow will work with a multidisciplinary team on the development of a NHP model of social and dietary factors that promote neuropathologic changes characteristic of Alzheimer’s disease, and determine functional correlates. The fellow also will be encouraged to make use of extensive NHP data, tissue, and imaging repositories that provide a rich source of research projects ready for analysis and publication.

Candidates must have a Ph.D. in the social or biological sciences. Requirements include outstanding skills in data analysis, written and oral communication, and the ability to work both independently and in a multidisciplinary team-oriented environment. Candidates with experience in NHP behavior and neurobiology are particularly encouraged to apply. The position is available for up to three years and compensation will follow NIH postdoctoral stipend levels.

Wake Forest offers an extensive support system for young investigators including pilot project programs, early career scientist training programs, working groups, and Office of Postdoctoral Affairs. Applicants should submit via email a letter of interest outlining experience and research goals, as well as a CV and the names and complete contact information of three references to: